The Future of Fundraising

Who, even five years ago, would have predicted that self-driving cars and robots in the surgical suite would be anything more than the stuff of science fiction comics?

Going back even further,who’d have ever thought anything on the ‘60’s cult classic television show The Twilight Zone would ever become reality: 3D printing or global warming,anyone? Or that today’slongestrunning television series The Simpsons would have predicted the future in some stunning and uncanny ways: the election of U.S. President Donald Trump, the invention of the smartwatch, and Disney’s takeover of 21st Century Fox, to name just a few.

Who knows how these screenwriters have managed to foresee the future. Could be serendipity, lucky guesses… or maybe they really are just that good at identifying trends and understanding how they will play out. While predicting the future is no easy feat, anticipating what successful fundraising will look like in the years to come and developing the necessary skills and tools to adapt are absolutely essential during these times of profound change. 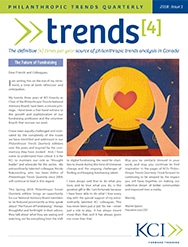