We live in an increasingly digital world.

Likely that’s stating the obvious. But if you’re at all skeptical, consider that in a recent survey, 46 percent of respondents said their smartphone is something they “can’t live without”. In addition, a report from Media Technology Monitor found that Canadians spent 24.5 hours online per week in 2016, with those aged 18 and 34 averaging 34 hours per week (or nearly five hours per day). And mobile is rapidly becoming the dominant platform through which that time is spent with a 2017 report from comScore noting that Canadians are spending the majority of their digital time – 63 percent – on mobile devices.

Of course,the non-profit sector is not immune to this movementtoward online and mobile. According to CanadaHelps.org, a non-profit organization that helps charities raise money online, gifts made via their platform increased 22.5 percent per year between 2006 and 2015. And increasingly, those gifts are being made on mobile devices, with Blackbaud’s 2017 Charitable Giving Reportsaying that 21 percent of all online donations were made in this way. 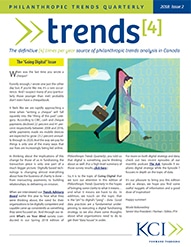